Crypto and blockchain developers could capitalize on the value advantages of multiple programmable blockchain networks. Ethereum emerged as one of the popular choices for facilitating smart contract programmability to create decentralized applications. As the demand for web3 development continues growing, debates such as web3.js vs Ethers.js have been gaining prominence for developers. It is more important than ever to identify JavaScript libraries which could help in deploying decentralized applications. At the same time, the need for deploying web3 applications across multiple blockchains also calls for selecting the ideal JavaScript libraries. The following discussion helps you find answers to “Which is better web3 JS or ethers JS?” with a detailed overview of each library. In addition, the side-by-side comparison of both libraries can help in finding out the ideal choice suited to your requirements.

Why Should You Compare Web3.js and Ethers.js?

The inception of web3 concepts has revised the traditional approaches for developing applications. Almost every web3 site or dApp uses libraries such as web3.js or ethers.js. The comparison between web3 libraries is an essential requirement for identifying the library which you can use. What are the libraries used for? The Ethereum JavaScript libraries could help developers interact with Ethereum or other EVM-supported blockchains through the JSON-RPC protocol. JavaScript libraries are useful for introducing various fundamental functionalities in a decentralized application. For example, the creation of wallets, smart contract deployments, blockchain querying and transaction signing. Developers can complete these actions without the necessity of raw API calls to the concerned blockchain.

The web3 vs ethers JS debate is a critical highlight for every web3 developer. Prior to any web3 development project, developers are likely to worry about the suitable choice of JavaScript library for their projects. Each library offers a compressed and reusable collection of code that could execute specific functions or a group of functions related closely to each other. Rather than writing a new code from scratch to add new functions, developers could add a library to the application and use it for implementing the desired function.

Imagine building a home as an analogy to building an application. Once you have developed the home, you will think of adding furniture to your interior décor. Would you work on building the furniture from scratch? The practical option would be to purchase the furniture you want for your home from a shop. The furniture store serves as a library where you can access your desired functions for the application, i.e., your home. Therefore, the differences between web3 libraries have been gaining prominent levels of attention in recent times, particularly among developers. When you know the functions served by each library, you can make the right choice for your concerned web3 application.

The discussions on differences between the JavaScript libraries for web3 should start with an overview of each library before diving into their differences. The first contender in the difference between web3.js and ethers.js would refer to web3.js, the original web3 library. It was the first Ethereum JavaScript API offered by the Ethereum Foundation. As of now, the Ethereum Foundation has outsourced the active development of the web3.js library to Chainsafe. Web3.js came to the forefront in 2015 and has served as a popular Ethereum JavaScript library.

On top of it, web3.js has also become a part of many projects and packages in comparison to other libraries. As compared to ethers.js, web3.js does not feature the separation of wallets and providers. On the other hand, web3.js assumes a connection between a local node of the blockchain and the application. The local node is believed to support different activities such as key storage, transaction signing and reading the state of the blockchain it has been connected to.

The overview of web3.js suggests that it is one of the earliest JavaScript libraries for web3 developers. However, it is also important to understand the benefits as well as drawbacks of web3.js for drawing a practical comparison with ethers.js. The two distinct advantages in favor of web3.js in the comparison between web3 libraries would point to the founding team and its popularity. Web3.js was developed by the Ethereum Foundation, which guarantees the effectiveness of design with a broad base of contributors. On the other hand, it has become one of the popular JavaScript libraries for developing blockchain applications. Before 2017, web3.js was the only web3 JavaScript library available. Therefore, it is quite obvious that it serves an important role in many of the early web3 projects.

The web3.js vs ethers.js comparison must also account for the setbacks associated with web3.js. First of all, web3.js has not been useful for many new projects. In addition, the library also relies on a license with formidable restrictions, such as limitations on modification of source code without releasing the changes in public. Most important of all, web3.js is considerably larger and could lead to a reduction in the speed and performance of a web3 site or app.

Get familiar with the terms related to Web 3.0 with Web 3.0 Flashcards

The comparison of web3.js and ethers.js must also focus on the definition, advantages and drawbacks of ethers.js. Developers of ethers.js suggest that the library is a comprehensive Ethereum wallet implementation alongside utilities in Typescript and JavaScript. The answers to “What is the difference between web3.js and ethers.js?” would point to the popularity of the ethers.js library. It has different functionalities for interacting with Ethereum as well as other EVM-supported blockchain networks. Ethers.js can also help in reading and modifying the state of the blockchain networks.

Ethers.js was created in 2015 by Richard Moore, a Canadian software engineer. The primary objective behind the creation of ethers.js focused on offering a lightweight and powerful replacement for web3.js. Since the launch of ethers.js, it has successfully achieved meteoric growth in popularity among Ethereum and EVM developers. One of the significant highlights in a web3 vs ethers JS debate would point to the effectiveness of key management and interaction with the blockchain network in ethers.js. Developers can find two different entities for key management and interactions with the blockchain. You can have a wallet in ethers.js for signing transactions with a private key while a node provider could help in connecting to the blockchain network. The separation of wallet and node provider could support their separate management.

The differences between the two libraries would also draw attention to the advantages and setbacks of Ethers.js. You can explore answers to “Which is better web3 JS or ethers JS?” by diving deeper into information about the advantages and setbacks of ethers.js. The first entry among the advantages of ethers.js would refer to the facility of a broader license that allows free usage alongside modifications. However, you must also release the source code with all the implemented modifications. Ethers.js is a lightweight library and also supports the use of ENS domain names. On top of it, the JavaScript library also supports many test cases, with proven support for almost 10,000 test cases.

While ethers.js presents noticeable improvements over the setbacks evident in web3.js, it also has many setbacks. For example, it is a comparatively new library, and developers encounter difficulties in using ethers.js for older companies or projects.

Excited to learn the basic and advanced concepts of ethereum technology? Enroll Now in The Complete Ethereum Technology Course

Differences between Web3.js and Ethers.js

The detailed description of the basics of web3.js and ethers.js offer an effective impression of how both of them serve useful value advantages to developers. However, it is important to find answers to “What is the difference between web3.js and ethers.js?” with side-by-side comparisons on the basis of different factors. Here is an outline of the different pointers which can offer you a viable comparison between web3.js vs ethers.js.

The first thing one would notice in any project or technical solution before using it would refer to the identity of the founders. The identity of developers could offer a generalized glimpse of the library’s credibility. The difference between web3 libraries turns in favor of web3.js, which has the Ethereum Foundation as its founder. With the assurance of a complete organization or ecosystem behind the library, developers can explore multiple functionalities. On the other hand, ethers.js was created by Richard Moore as an alternative to web3.js.

Here is an outline of the differences between web3.js and ethers.js in the form of a table. 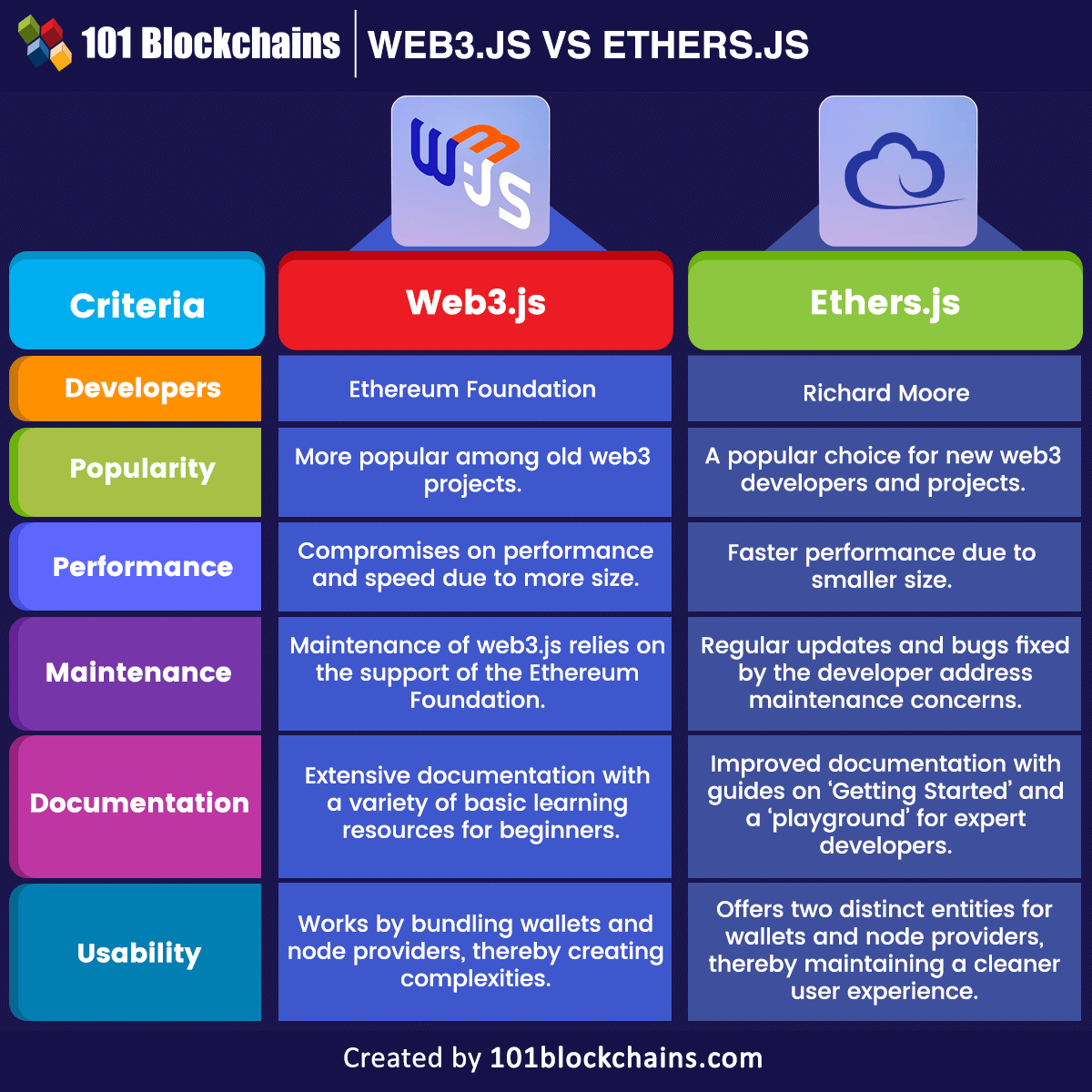 The next important factor for finding the answers to “Which is better web3 JS or ethers JS?” would refer to performance. Ethers are a considerably lightweight library in comparison to web3.js, thereby guaranteeing the assurance of better performance. Ethers.js is only about 77 kb in the compressed form and 284 kb in the uncompressed form. At the same time, the web3.js library can take up space in the number of megabytes. However, the size factor comes into play for performance in the case of small dApps. Furthermore, the lack of adequate speed test data for the same apps with web3.js and ethers.js create doubts about the performance advantage.

The evaluation of the difference between web3.js and ethers.js in terms of maintenance also qualifies as another highlight for comparing the two libraries. Web3.js enjoys support directly from the Ethereum Foundation with active maintenance schedules by Chainsafe. With around 304 Github contributors alongside 4 collaborators on NPM, web3.js offers significant benefits for web3.js. On the other hand, ethers.js is under maintenance by an independent software engineer. As of now, it has only one NPM collaborator and around 15 Github contributors. However, the comparison between web3.js and ethers.js reflects on reviews and feedback from developers for identifying maintenance efficiency. Both the web3.js and ethers.js libraries go through regular updates to resolve bugs and adding new features.

The facility of documentation is another highlight in the comparison between web3 libraries for identifying the ease of starting with the libraries. Each web3 JavaScript library has extensive documentation which can help you begin your journey with web3 development. On the other hand, ethers.js presents additional resources such as a guide for ‘Getting Started’ and the ‘playground.’

The usability of web3.js and ethers.js is also another important factor for comparing the two libraries. Web3.js works by combining wallets and node providers in a single object. On the contrary, ethers.js has two distinct entities for wallet and node providers. Therefore, ethers.js can offer the flexibility for separating the reading and modification of the blockchain state from the signing and maintenance of private keys. As a result, ethers.js can guarantee a better developer experience with the separation of wallets and providers. At the same time, web3.js is an ideal choice for beginners with the flexibility of learning from tutorials, support documents and web3 projects.

The outline of the differences between the web3.js and ethers.js libraries shows that both of them are equally significant. Interestingly, the answers to “Which is better web3 JS or ethers JS?” can differ according to your requirements. For example, beginners can use web3.js to learn their way through the fundamentals of using web3 JavaScript libraries. On the other hand, ethers.js offers more practical documentation for using the library right away. Similarly, ethers.js offers the assurance of better performance through its smaller size, while web3.js is complicated with its size in megabytes. Depending on your requirements, you can identify a suitable pick from web3.js or ethers.js for your web3 project.

SushiSwap to Redirect Trading Fees to its treasury

To send a tip to the author, please login. After the coin has spent close […]

Scientists have discovered the most metal planet in the galaxy – in that it literally rains metal. Somebody call Tom Araya! Extrasolar planet WASP-76b is approximately 640 light-years from Earth. When day turns to night, it rains iron! CNet explains: The findings, published in the journal Nature on Wednesday, come via a 60-day observation of WASP-76b…