With the third week of January right before us, investors are looking for the best altcoins to buy. This article shows the best altcoins right now, with the market still battling the bears and looking to break out of its slump. 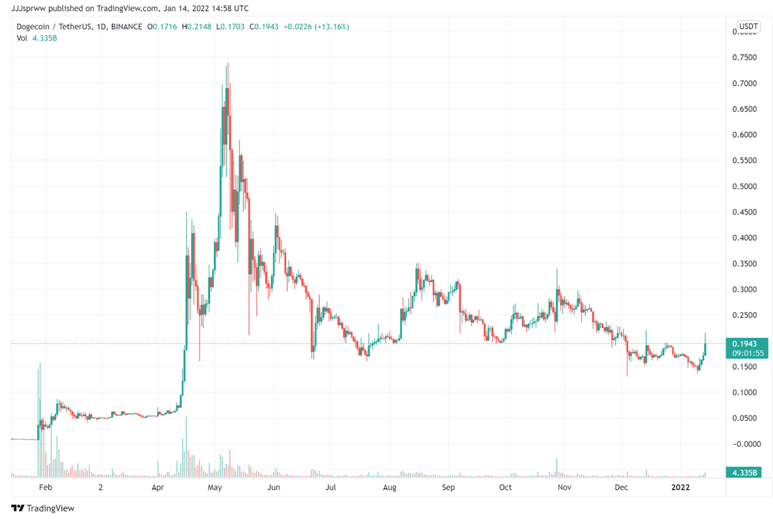 Dogecoin kicks off our list of the best altcoins to buy as the current week comes to an end. It is the most popular meme coin in the market, and it already has a legion of undying fans on the internet and across social media platforms.

By the sheer size of its fanbase, it’s easy to see why Dogecoin is a good investment. However, the asset’s developers are now pivoting to make it a serious cryptocurrency with a real use case.

This week, Tesla CEO Eon Musk made good on a promise to sell company merch and accept Dogecoin as a means of payment. Tesla’s official store now accepts Dogecoin for merch payments, making it the first company to use the meme coin for actual payments.

Musk has spoken a big game about Dogecoin and its potential for payments in the past. Now, he appears to be putting his money where his mouth is.

As expected, the reception to this has been raucous. Dogecoin’s price has been up 11% in the past 24 hours, and this news could cause it to jump even higher.

Now, it will be interesting to see who else follows Tesla’s footsteps and accepts Dogecoin for payments.

Besides the payment breakthrough, the Dogecoin Foundation recently confirmed plans to bring staking to the dog-themed asset. Staking is a hot trend in the market right now, and making Dogecoin stakable will be the next step in establishing the asset as a true cryptocurrency with massive potential. 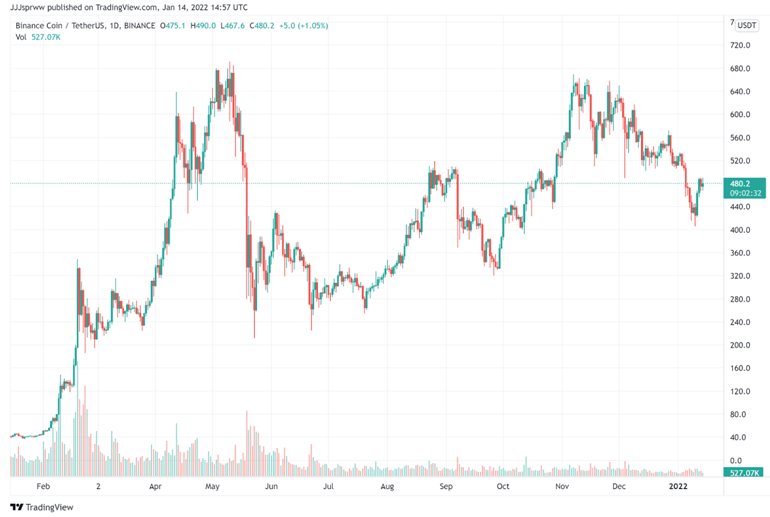 BNB is the native token for Binance – the world’s top cryptocurrency exchange. It features on our list of the best altcoins to buy for many reasons, all of which are related to the exchange.

For one, Binance’ CEO Changpeng “CZ” Zhao was recently named the richest man in crypto. With a net worth of $96 billion, Zhao is the world’s 11th richest person, one spot ahead of Indian oil magnate Mukesh Ambani.

Also, Binance itself is looking to expand significantly in the new year. The company suffered different setbacks in 2021, primarily as it found itself repeatedly in the crosshairs of regulators worldwide.

From the United Kingdom to Italy, Binance became the poster child for crypto companies that could seemingly do no right.

But, all of that is changing in 2022. The company got approval to operate in Canada and the Kingdom of Bahrain three weeks ago and tapped two new compliance executives to lead its entry into Russia, Ukraine, and the Commonwealth of Independent States (CIS) this week.

As a side note, the exchange is also an official sponsor of the African Cup of Nations (AFCON) tournament. This initiative could strengthen its ties to the second most populous continent.

Binance is already the world’s top exchange, but it is looking to expand its influence even more in the future. As the company gets bigger, so will BNB’s value. 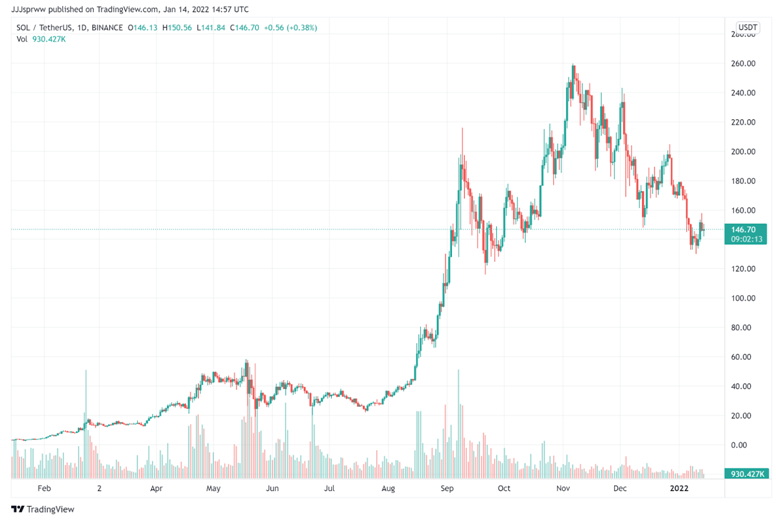 SOL is the native token for Solana – one of the world’s most popular blockchain platforms at the moment. The asset got its big break in 2021, as developers began to move from Ethereum and look for alternative blockchains to build on. Among the famed “Ethereum killers,” Solana emerged as the preferred choice.

Now that Solana has carved a niche for itself in the crypto market, the blockchain is also looking to grow. And, its efforts so far haven’t gone unnoticed.

This week, Alkesh Shah, a digital asset strategist at Bank of America, predicted that the platform could become the “VISA of crypto” soon.

Currently, everyone sees the growth potential for Solana. Despite being less than two years old, the blockchain’s SOL token has risen to become the crypto industry’s fifth-largest asset.

As the blockchain space grows, Solana will have an increasingly important role. This makes SOL an attractive investment across the board. 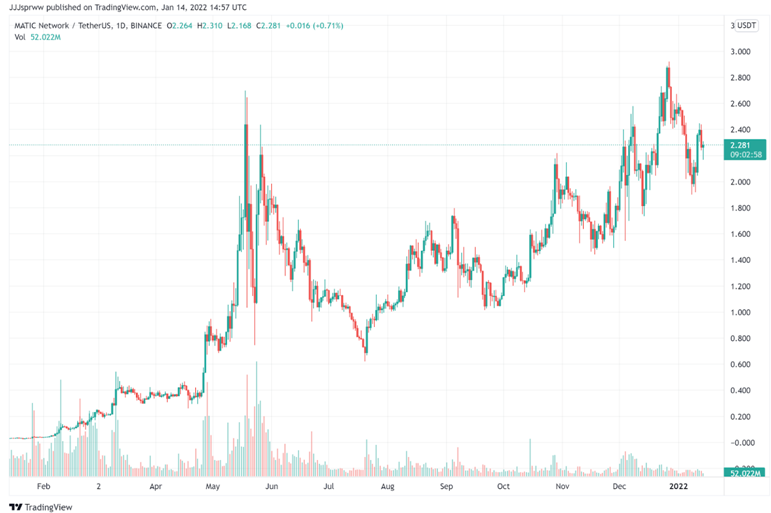 Another great name among the top altcoins to buy right now is MATIC. The asset is the native token for Polygon – a layer-two scaling solution for Ethereum that has become more popular in recent months.

Polygon offers a scaling solution for Etheruem, allowing developers to bypass the latter’s high transaction fees and increasing latency when building. It is also a platform where developers can build and launch their fully-functional blockchains and decentralised applications (dApps).

Recently, Polygon has been getting a lot of praise for its seamless compatibility with non-fungible tokens. On Tuesday, the Associated Press (AP) – one of the world’s foremost news and publishing outlets – launched an NFT marketplace on the Polygon blockchain. With this marketplace, AP photographers would be able to sell some of their most iconic snaps as NFTs.

Independent data also shows that NFT activity on Polygon has been increasing in several months. MATIC just might ride the NFT train in 2022. 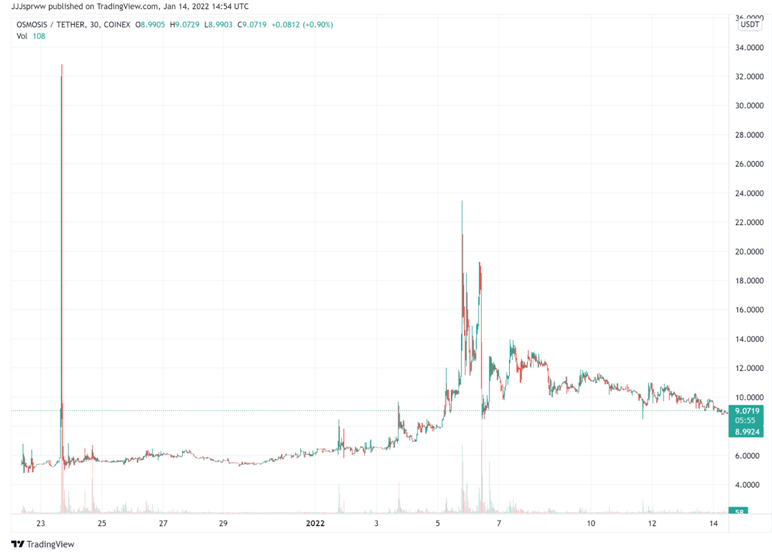 Last on our rankings of the best altcoins to buy right now is OSMO – the native token for DeFi protocol Osmosis.

It is a growing project in the DeFi sub-industry, and as history shows, DeFi projects that have become popular tend to do well. OSMO’s price has jumped by over 100% in the past month, culminating in an all-time high of $32.

The price increase comes as Osmosis continues to grow significantly. Trading volumes on the platform hit a record high of $186.8 million on January 7, and the total value locked in the protocol is currently at a record high of $1.23 billion. With strong fundamentals everywhere, OSMO is quite attractive as well.

How to Buy Dogecoin
Where to Buy Binance Coin (BNB)

India could soon launch a Bitcoin and Ethereum ETF

It’s one postponement that has nothing to do with the COVID-19 coronavirus pandemic: SpaceX scrubbed its latest launch of 60 Starlink satellites Sunday morning and will try again Wednesday.Just as the countdown clock hit zero at Florida’s Kennedy Space Center and the Falcon 9 rocket’s engines began to fire for a split second, the system…

Elon Musk tweeted, saying that he will eat a happy meal on television if McDonald’s […]